When you get to read your book—your actual hard copy book—it’s a completely different experience to that of reading the pile of A4 pages it has been for so many iterations prior. More authoritative, somehow. As if the story was never anything other than this. So, with that weightiness of Ripiro Beach in my lap as I type, I return to the beginning, to remind myself how the original embryonic Word documents compare to the final volume.

There are dozens of versions of Ripiro Beach, the first of which, begun in 2016, didn’t even have a name, just ‘Current.doc’. It’s a collage of notes and sections of ramshackle prose. A list, too:

2011: Hazel’s birth. Looking through the window as a ghost.

Even so, right at the beginning there exists the concept of the gold-tinged past, and the flat, grey present. There are the bones of Chapter 6 in which I recount the day of my father’s fatal heart attack. There is the hideous rage and sense of brain fog that I do not understand. Above one section of prose I’ve typed: MAKE THE TONE MORE, YA KNOW, BEAUTIFUL.

But wait. 2016 wasn’t the very beginning, I’m sure of it. I dive back into my files. Ah, there. From September 2013, I’d kept notes, scraps of writing about things as they happened. A journal of sorts. My discoveries at Archives New Zealand. Finding out I was Māori. Walking Cox’s Bay to find the place my birth grandmother leaped to her death.

To put this into perspective, I’d begun writing what became Ripiro Beach a full two years before starting the Masters of Creative Writing with Paula Morris. During that 2015 masters, the memoir fell away as I attempted to drape those traumatic family stories in a korowai of fiction. I wasn’t ready to be that brave. Instead, I wrote an imagined tale of my birth grandparents meeting, and my father’s birth and adoption, set in Auckland’s giddy World War Two party time, when the Americans were in town. That manuscript remains in my drawer, but will find its place one day.

After completing the masters, a force began pressing upon me. I knew it was driving me to write the truth, but I didn’t know how to. So, I started where I always start. On a chair, in front of a screen, seeing what might happen next.

And here’s the extraordinary thing. There came a time when writing Ripiro Beach, that the timeline caught up with itself and I was writing in real time. I remember it so clearly—it was the weekend in May 2017 that I went solo up to Ripiro / Baylys in search of my great-great-great grandfather’s grave at Tokatoka. From that point, the story tumbled forth, taking me to a place I could never have anticipated. I never intended to write about the effects of uncovering all those tragic family secrets, or going to therapy to figure out why I was so broken. It just happened.

And hand in hand with that was my burgeoning love affair with Ripiro, and the family history I found there. ‘How could it be?’ I write in Chapter 25. ‘How could I have been drawn back to a place I’d never known, which turns out to be the place of my ancestors? How could there be a plumb line from ancestors to heart to earth, pulling me to Baylys Beach, tethering past to present?’

The last third of the book (covering May 2017 to May 2018) is written in real time. What’s more, I thought Chapter 42 was my last. But no. Then there was the University of Auckland master class with Karl Ove Knausgård, hosted by Paula Morris. There, he told me this: ‘Remember, the closer you go to yourself, the more universal it becomes.’ I was floored. That spawned an epilogue, and yet another draft where I banished the final remnants of self-consciousness, and wrote the story that I’d been trying to write for years.

Caroline Barron is an Auckland writer and editor. Her debut, Ripiro Beach: A Memoir of Life After Near Death (Bateman, June 2020), is in bookstores now. Or, you can get your signed, inscribed copy (with free shipping) from www.carolinebarronauthor.com 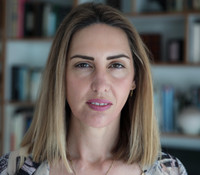 The books you read as a child can have a significant effect on shaping your world view (which is just one reason why I worry about my son’s wholehearted consumption of Captain Underpants). In my case, there are two books which I read when I was in my pre-teens which made a huge impact on me, which I have carried forward into my adult life.

One was Louis Lowry’s debut novel A Summer to Die, in which a girl comes to terms with her sister slowly dying of leukaemia. I remember reading it while being on lunchtime duty in the school office at Belmont Intermediate and bawling my eyes out when I got to the end — my first experience of being so moved by a book that I literally couldn’t stop crying (re-reading the synopsis on Wikipedia has just set me off again, BTW). It created in me the determination that a book was only truly great if I was moved to tears by it, a maxim I have stuck to throughout my life. Other books which more recently have made we weep throughout the last few chapters have been, notably, The Lovely Bones by Alice Sebold and Everyone Brave is Forgiven by Chris Cleave. I hope one day to write a book which moves its readers to this extent; I probably won’t succeed, but it is a worthy goal.

The other book which I read during this time, which also affected me but in more mysterious ways, was a Puffin paperback edition of a 1976 children’s non-fiction title, The Dodo, the Auk and the Oryx, by American Robert Silverberg. (Wikipedia helpfully tells me he was also a massively prolific writer of science fiction and, when financial times were tough, soft-core pornography. Didn’t know that in 1982.) It told the sad but important stories of a number of species around the world which had become extinct, through the actions of humans — either by deliberate hunting, over-exploitation, greed or sometimes simple carelessness. It featured New Zealand’s prodigious bird, the moa. And, like any good young writer, I remember thinking at the time: I could write this book. And in it I could tell our stories, about the things we have lost here.

I was brought up in a conservation-minded household; my parents were very active in Forest & Bird and most/all of our holidays and family outings revolved around nature and conservation (except for the ones which were based around New Zealand’s history, which developed my other passion). I was morbidly fascinated by the idea of extinction — as a fairly anxious child, obsessed with not losing things, the thought that something as significant as an entire species could be allowed to vanish from the world forever seemed both disturbing and strangely compelling. I used to wonder, what would it have been like to see flocks of passenger pigeons so enormous their wings blocked out the sun for hours at a time as they flew over? And how could it be that, within a few human generations, they could have been utterly wiped from the Earth? Likewise, what must it have been like in the primeval forests of New Zealand, the air loud with birdsong and huge flightless moa crashing about? And how did it feel to shoot the last huia the world would ever see?

However, it took 37 years and a couple of false starts before I finally sat down behind a desk at the Michael King Writers Centre in Devonport and put my fingers to the keyboard. At the end of the previous year, 2018, while recovering from the emotional and physical exhaustion of submitting 40,000 words of a novel for my Master of Creative Writing assessment, I had managed to put together an application for the New Zealand Society of Authors/Auckland Museum research grant and residency. The goal was to utilise the museum’s resources, a $5000 stipend and four week’s writing time at Michael King to write a draft of my own salute to New Zealand’s extinct species.

I was standing at a large playground trying to keep track of both my kids when I checked my phone and got the email saying I’d been awarded the grant. This was it — the book I’d thought about so long could finally become a reality! And with the support of my publisher and friend Jenny Hellen of Allen & Unwin, with whom I had discussed the book about a decade earlier (pre-kids) when we both worked at Random House, Lost Wonders: Vanished Creatures of Aotearoa came into being.

Anyone who’s ever tried to write a book and run a household at the same time (i.e. just about every writer) knows what a blessing it is to be given time and space to just write. This was a golden chance to immerse myself in research and pour out all the stories that I had been writing in my head for so long. Some of the stories I already knew a bit about — the huia, the moa, Lyall’s wren, takahē and kākāpō (which fall under the heading of ‘lost and found’) — but the process was also a voyage of discovery for me, uncovering the sad but true stories of the lost species of Big South Cape and the Chatham Islands, the native thrush and quail, and the grayling, New Zealand’s only extinct fish. There was so much more I could have put into the book — the challenge was selecting what was vital to the story and what would have to stay rattling about in my head.

Capturing the vivid pictures I conjured up in my own mind while researching, I used a narrative non-fiction technique at the start of each chapter to draw readers into each story, helping them to imagine being back in the past when these amazing birds and other creatures were still among us. And I made sure to pay tribute to the conservation pioneers, especially of the 70s and 80s — the time of my childhood — who saved species like the black robin and saddleback from obliteration, so that these wonders remain in the world today.

Always in the back of my mind when I was writing was the hope that by telling these stories of what we have lost, and what stands on the brink, another generation of young people can develop an understanding of our history and a passion for conservation. I like to think I’ve done justice to my original inspiration, The Dodo, the Auk and the Oryx, and I hope that in the future, reading books like mine will instil a love of nature in more Kiwi kids, fuelling their desire to protect it. In the meantime, I’ll go on trying to write that novel that makes people cry.